On the Track and Off, DAYLube Nano-Ceramic Grease Shaves Off Crucial Time 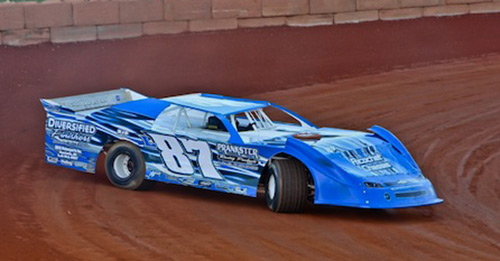 If you would've told Richard Lynch of Prankster Racing Products a year ago that he could shave off two-tenths of a second just by using Dayton Progress' DAYLube grease, he would not have believed you.  Still, he made the switch and saw the time savings—and the checkered flag—for himself.

In racing, friction is the number one enemy. "Anytime you have something running cool, running with less friction, that means more speed," Lynch said. And speed is what the racing community is after. In addition to faster lap times, Lynch also applied the grease to his trailer he uses to tow the racecar, and noticed significant time savings there too. Lynch has experience savings on and off the track thanks to DAYLube grease's high temperature resilience and long-term endurance.

Lynch, of Yadkinville, North Carolina, primarily races dirt track circuits. He made the switch to DAYLube in March after meeting a Dayton Progress representative at a racing expo in Charlotte.  He applied the grease to the wheel bearings of his Dirt Late Model car before the 9-month dirt track season, and didn't have to change the grease throughout the Crate Dirt Late Model class season. One 16 ounce tube of DAYLube cost him $28, and in one season he only used two ounces.

Previously, with a store-bought grease, he would have to re-apply grease up to three times in a season, spending half a day each time taking apart wheels individually, cleaning the wheel bearing, applying the grease, and putting the car back together again. At 30-45 minutes per tire, with two to three bearing changes per season, that adds up to hours' worth of time Lynch can spend on running his shop or finding other ways to shave time off his races.

An unexpected time-saving bonus came in the garage: DAYLube grease cut Lynch's maintenance time down significantly. In addition to the time he saves not having to re-apply grease every other month, Lynch saves both time and money by not having to replace parts as frequently. After this most recent season, Lynch removed the wheels and his bearings looked as good as new.

"You would've sworn that I just put new bearings in: there only the slightest discoloration of the grease from white to light gray and the bearings show little to no wear," he said.

Especially in dirt track racing, where the wheel bearings take a rough beating from the turns, bumps, and uneven terrain, Lynch needs all the help he can get to prevent friction where metal parts meet. Metal on metal not only causes friction—which decreases speed—but it also causes wear on the parts that are rubbing.

"Whenever you can keep the friction down, you keep the heat down, and don't have as much wear on the individual parts because metal products aren't wearing against each other," Lynch explained.

DAYLube creates a sustained layer of nano-ceramic grease between those metallic parts, reducing the friction that warps and wears the bearings. For Lynch, this means less time in the garage changing the bearings.  This past season, he didn't have to replace the bearings once, unlike other seasons where he replaced them up to three times.

After seeing how DAYLube saved him so much time in the garage, Lynch decided to use the grease on his tractor as well, and noticed the same time-saving benefit. On a trip to the Hilltop Speedway dirt track in Marietta, Ohio, he cut hours off of his drive time. Lynch uses an open trailer to haul his racecar from one dirt track to the next and applied the DAYLube to both the wheel bearings and the ball attachment. With the car on the trailer, and loaded with tires and spare tools, the trailer weighs up to 6,000 pounds. Normally, he would have stopped every two hours for 45 minutes to let the bearings cool, and the 370-mile trip would have taken him seven hours.

With the DAYLube grease, the hubs were still cold on the first stop, so he kept driving. They were only lukewarm on the second check so he kept driving. On the way back, he did the three-stop trip in one shot, and pulled in the driveway two hours earlier than he would have. He made the trip without having to stop every 150 miles, and stand around waiting for the wheel bearings to cool down. On the way to the race, saving time means Lynch is less fatigued for the race itself.  Saving two hours on the way home after a long weekend and a hard race is even better. Normally Lynch keeps his races local, traveling up to a half hour every week, but now he is looking forward to traveling to the Hilltop Speedway and the Ohio Valley Speedway in Lubek, West Virginia more frequently now that his trip is so much easier.

After seeing how effective DAYLube was in just one season, Lynch uses it on everything: to keep his truck doors and tailgate from squeaking, and to prevent the ball on the tractor from overheating.

"I use it on pretty much anything I can find," he said.

It was a difference he had to see to believe, but Lynch says being able to push a 2,300-pound car into a flat garage by himself is proof enough for him.

Dayton Progress' DAYLube grease has been a game changer for Richard Lynch of Prankster Racing. He shaved two-tenths of a second off his race time, and hours off of his maintenance and transportation times. Despite the rough terrain of dirt track racing, Lynch doesn't have to spend precious time and money replacing his bearings, which take a beating every time he races. DAYLube's resistance to temperature and enduring viscosity saves Lynch time in the garage, on the road, and most importantly, on the track.